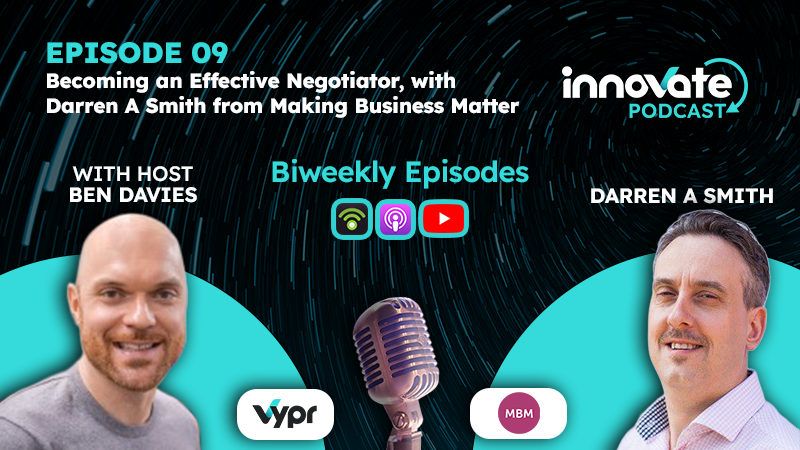 The Innovate Podcast is a biweekly series of discussions with CPG Innovation experts, on how to innovate with success in an ever-changing world.

In the ninth episode, the last of Series 1, our host Ben Davies, Founder of Vypr, was joined by Making Business Matter CEO, Darren A Smith.

Having had extensive experience working as a buyer at big retailers, to now managing his own business providing soft skills training, Darren brought his insights to discuss the key principles to becoming an effective negotiator for win-win outcomes.

Listen to the full episode using the links below, and don’t forget to subscribe so you never miss an episode.

Listen on Podbean, Listen on iTunes or Watch on YouTube

Read the highlights below.

Throughout the episode, Darren emphasised the principles effective negotiators need, and how buyers can move through each stage of the negotiation process effectively.

Negotiators Need to Prepare and Empathise

Firstly, Darren explained that there are roughly 4 stages of the negotiation process – Preparation, Exploration, Proposal and the Conclusion/Summary.

He observed that less-effective negotiators often skip the first two stages, and start by jumping into making presentation slides, which is in his opinion is where many lack. He instead emphasised the importance of more thorough preparation being done beforehand, using resources such as the Squaredance technique, a free resource provided by his training business.

Too often, less-effective negotiators forget that empathy is important, but in comparison more effective ones understand the other party and that ideally a win-win situation must happen.

So, negotiators need better preparation and more empathy, but must also know the more concrete tools they can use in the process.

Tools Need to be Put in Place for Negotiation

During the preparation stage, as part of the Squaredance technique, it’s essential for people to think about what tools they will use, tactics that allow for better negotiation – simply presenting slides is not enough.

“What tools are you going to use? There are probably a hundred negotiation tools and they’ve got to select the right ones for their negotiation.”

Darren gave an example of one such tool – the ‘up and over’ technique.

This technique is all about taking a presented offer, usually unreasonable, and matching it with an equal yet credible offer, to make the person who made the first offer realise that their offer is in fact, unreasonable. This means arguments can be avoided and more constructive negotiations can take place – so you can avoid saying no to someone, by simply taking what they’ve said and find a way to match it.

Negotiators need to use these techniques, however, it’s important to use a few and use them well.

There are lots of tools available, but Darren made a point of making sure they’re used properly, instead of trying to make use of every tool and end up not using any satisfactorily.

These Tools Apply in all Discussion Formats

Though the techniques discussed above still apply, this new format brings about a new set of rules – people need to be careful when on virtual formats, as without a good set-up they can look less influential.

Darren pointed out that communication should be ‘brought up’, for example, by bringing hand gestures into view. As it’s less easy to see small non-verbal cues over screen, this makes virtual formats a little more difficult, so this should be kept in mind.

“Most techniques will apply whatever the format is, because you’re trying to move the negotiation forward to a win-win. The bit that is really interesting is over here [virtual platforms]. We’ve got to make sure that we’re framed properly, filling up as much of the space as possible, I’ve got decent light and I’m talking to the camera.”

Where possible, it’s important to try to get face-to-face time as this makes communication much clearer, and it becomes easier for both parties to understand what the other is saying.

Remember, Haggling is not the Same as Negotiating

In the negotiation process, haggling will often feature, but Darren emphasised the distinction between this and negotiating – haggling is usually about meeting in the middle, on a one-dimensional linear scale (i.e., on the price). In comparison, negotiating is discussing across multiple dimensions, not just the price but also colour, delivery, quality, and more – it’s looking at multiple parts to try and reach a resolution.

“Most negotiators are haggling. And that’s ok, it’s still a valid form of resolving a conflict, what we’re teaching our learners to become an effective negotiator is to know the difference… We need to know which one we’re doing, and which one will be the most effective”

Ben followed up asking what to do if one party is negotiating and the other haggling. Darren’s response was to always try to bring the haggling party to negotiate, by offering more. Though negotiation is more complex, it is what Darren believes we should ideally do more of, by using a more structured approach.

“Try to bring the other party to negotiating, and you’re going to do that by introducing tradeables… those extra things that make the negotiation a bit more interesting”

However, people can often find themselves in a situation where the other party says something like ‘if you can’t offer this, we’re off’. This is a frequent issue for negotiators, and therefore it is important to conduct the next stage of negotiations – exploration – to avoid and navigate such challenges.

The second stage of negotiation, exploration, is all about finding out what the other party wants.

It’s crucial to make the effort to explore. Many are afraid to do this as they believe what is mentioned becomes concrete, but the truth is, you aren’t tied into giving what the other party is asking for. This phase is just about finding out what they want, to see what is possible, and perhaps to consider whether to introduce tradeables as we mentioned above (discover examples of these in the full episode using the links in this article).

“Just because I’m exploring doesn’t mean I’m accepting I will give you this, all I’m doing is finding other ways to try and bridge this gap”

When exploring, open questions are better than closed ones.

Closed questions are ones which only get yes or no answers, so instead, open questions should be used more often. Asking open questions gets the dialogue going and ensures you understand the other parties needs in more detail.

All in all, exploring helps you create a proposal that is tailored, and so more likely to be listened to.

The third stage and final step before the conclusion/summary is the proposal stage, and this is fuelled by the above two stages. Thorough preparation and exploration will mean you’ve done the best to understand the other party and ensure smoother negotiations.

“Often we go into negotiations, straight into proposal stage, the other person doesn’t like it because we’ve got no idea what they want”

And of course, don’t forget to keep everything written and take notes to ensure a smooth summary/conclusion.

Ultimately, the biggest point Darren emphasised was to make sure preparation is done effectively, as this is where most people end up lacking which makes them less effective in negotiations.

If you want to discover all the insights on becoming an effective negotiator, such as what tradeables are and how to manage expectations for more success, watch the full episode using the links below.

Listen on Podbean, Listen on iTunes or Watch on YouTube 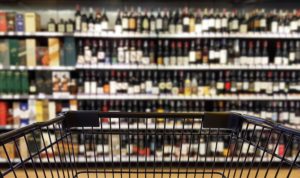 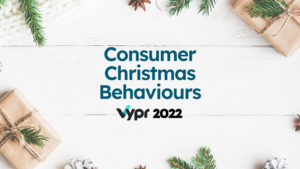